Crvenka has a long vineyard and cellar tradition that dates back to the late 18th century, when the first colonists from Western Europe settled this place. The coat of arms of the place, which dates from that period, and bears a bunch of grapes and outlines of the cellars of Crvenka serves as a proof of this.

Immigrants of the time who were mostly Germans, quickly realized that the configuration of the terrain provided by the surrounding settlement of Crvenka was ideal for raising vineyards and orchards, because it abounds in many terraces of the southern exposition of drained, loose and warm land of “Telečka plateau”. The growth of vineyards and orchards was accompanied by the development of infrastructure necessary for such production, and it primarily referred to the construction of the cellar. It is estimated that at the end of the 1930s, there were about 600 privately owned cellars in Crvenka, which, in addition to their storage function, also played a significant role in Crvenka’s socio-cultural life. Families stayed there during the work season, so at the time they gave a dynamic cultural and social life to Crvenka.

The Provincial Institute for the Protection of Cultural Monuments wants to renovate the wine cellars in Crvenka, as the unique complex in Serbia, in order to preserve the authentic ambience and visual identity of the place, which was founded in 1785 by the Danube Swabians. Basements were an important part of Crvenka’s social life until the period between the two world wars. Some of them are up to 200 meters long, and consist of three parts. The first part is the room where feasts were prepared for wine-growing families and their guests. In the other room, which is longer, there were grape presses and tools. The third part, which was usually not completely built, was used to store barrels with young wine. 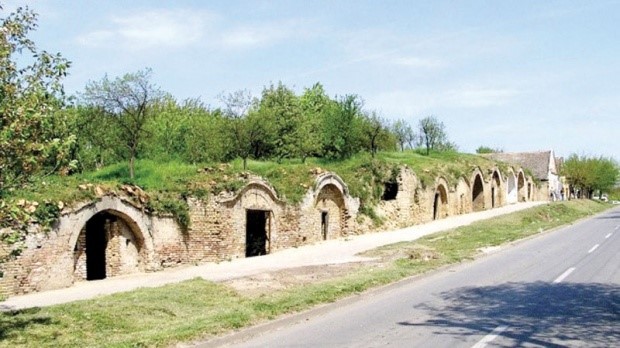 Unfortunately, there are no more vineyards in Crvenka as there were before, so it is unrealistic to expect all cellars to be brought to their original purpose, but it would be nice to use at least a few of them for storage or at least for selling and tasting wine. Having that as a goal Tourist organization of Kula municipality along with the foundation “Stari podrumi Telečke visoravni” and the association of winegrowers and fruit growers “Stari podrumi” is working on renovating and bringing the cellars into operation in order to again represent an attraction and part of the tourist offer of the Municipality of Kula.